Anyone who has been paying attention to the Fox News Senior White Nationalist, Tucker Carlson, for any length of time, may have thought that he had already achieved peak assholiness. He recently produced a crocumentary asserting that the January 6th insurrection was “false flag” operation orchestrated by the FBI. He has argued against critical race theory, even while admitting that he doesn’t know what he’s talking about. And he has been a staunchly pro-COVID voice, spreading blatant lies about the virus and vaccines. 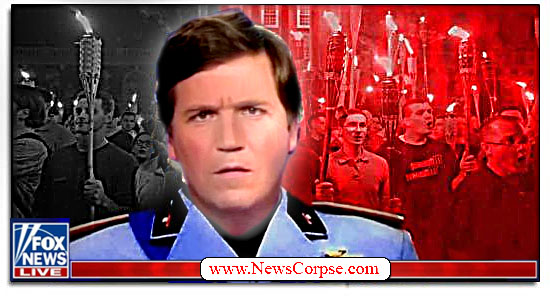 However, Carlson is not one to rest on his loathsome laurels. And he proved it on Wednesday night’s episode of his Fox News Hour of Sour Demagoguery. Carlson conducted an interview with Republican Rep. Mike Turner wherein he twisted U.S. diplomacy and American principles entirely out of shape (video below). He questioned why the U.S. would stand with Ukraine against the threat of Russian aggression. Carlson asked Turner…

“Why would we pick Ukraine’s side and not Russia’s side? It’s a sincere question. If you’re looking for the American perspective, why? Who’s got the energy reserve? Who’s the major player in world affairs? Who’s the potential counterbalance against China, which is the actual threat? Why would we take Ukraine’s side? Why wouldn’t we have Russia’s side. I’m totally confused.”

Whereupon, Turner had to remind Carlson that…

Carlson had a pitifully unconvincing response, saying that, “Yeah, I guess I’m for democracy in other countries. I guess.” Then he stuck with his original answer anyway. It’s good to know that Carlson’s lukewarm appreciation for democracy doesn’t interfere with his anti-Americanism. Especially coming from someone who recently embraced the tyrannical dictator of Hungary, Vikto Orban. And Carlson has also been a avid believer in Donald Trump’s “Big Lie” that the 2020 presidential election was “rigged” and “stolen” from him. So he is clearly no fan of valid elections.

So why would Carlson leap to Russia’s defense in this debate? Well, remember that Russia eagerly helped the Trump campaign in 2016 and 2020. Ukraine, on the other hand, was threatened by Trump with the loss of military aid if they didn’t try to dig up dirt on Joe Biden. Trump was impeached for that. But Ukraine declined to help Trump steal another election.

So it isn’t hard to see why Carlson is pro-Russia and anti-Ukraine. Never mind that Russia is a totalitarian foe and Ukraine is a democratic ally. Since Russia provided Trump with assistance, while Ukraine maintained their independence and integrity, that was all that Carlson needed to choose to back Russia and Trump’s BFF Vladimir Putin. It’s just further evidence of the treasonous acts of Carlson and his confederates at Fox News.

"I'm totally confused" — Tucker Carlson wonder why the US would be allies with Ukraine instead of Russia, since Russia has more energy reservers. Rep. Mike Turner reminds him that we're supposed to be on the side of democracies. Carlson responds by saying, "I guess" pic.twitter.com/XIXfJXKsML

Donald Trump (aka Cadet Bone Spurs) has a long history of disparaging America’s Armed Forces and the people who serve in them. It goes back to his own record as a five-time draft dodger during the Vietnam War. And it was revealed during his presidential campaign in 2015 with his insulting denial that John McCain, and every POW, were not war heroes, because Trump “likes people who weren’t captured.” 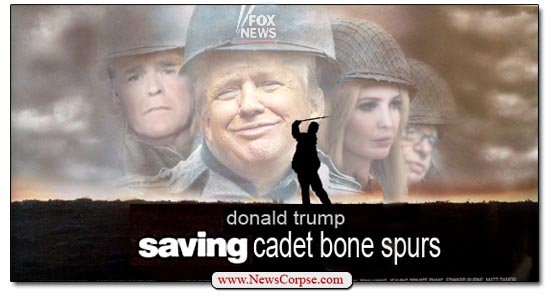 On this Veteran’s Day Trump posted a video (via his Twitter ban defying spokes-shill) that reaffirms his callous disregard for the people who serve in the U.S. military. In a brief recorded statement the malignant narcissist couldn’t help but turn his message into an anti-America rant with allusions to his deranged belief that he is going to be restored to power (video below):

“On this Veteran’s Day I’d like to pay tribute to all of the incredible people – and you are indeed incredible people – who served so well and so strong and so powerfully in the United States Armed Forces. We love you, our nation respects you, the world respects you, and we will come back. Our country has gone through a lot. The last period of time has been very, very tough, watching what you had to watch. But our country will be back and will be back stronger than ever. Happy Veterans Day.”

So Trump couldn’t just praise veterans on this day set aside to celebrate their service and their sacrifice. He had to add his self-serving criticisms of the current state of the military and his not-so-thinly-veiled references to “coming back” like the wingnut messiah he believes himself to be. Trump can never let anything or anyone steal attention from his assholiness.

For the record, Trump has spent much of his time in political life bashing the military. Just last month he declared that “Everything is falling apart, our military is in shambles [and that] The USA “is very sadly going to hell!” And after a tragic accidental killing of Afghan civilians, Trump blamed “our incompetent Generals,” who were the same generals in charge during his term.

Trump also insinuated that soldiers suffering from PTSD were weak and “couldn’t handle” the hardships of war. And he famously ripped them off with a phony telethon staged as a flimsy excuse to chicken out of a presidential debate.

Perhaps worst of all was his attempt to get out of a visit to the Aisne-Marne cemetery in France where Americans soldiers were laid to rest. “Why should I go to that cemetery?” Trump whined. “It’s filled with losers.” He later added that the 1,800 plus marines who died at Belleau Wood were “suckers” for getting killed. “What’s in it for them?” he asked. “They don’t make any money.”

All of this displays the character – or lack thereof – of Donald Trump. And it establishes his disdain for veterans and service members. The video he posted was utterly disingenuous and exploitative. Like everything else he does, it was intended only to advance his own egomaniacal interests. That’s unfortunate for the veterans he is maligning. They deserve so much more on this Veteran’s Day.