The latest example of their repulsive hate messaging is an article purporting to show contrasting photos (below) of President Obama and Texas Governor Rick Perry in their youth. It’s actually generous to call it an article. To be accurate, it is just a link to a photo that some wingnuts are distributing on Twitter. The photo juxtaposes an image of Perry in military garb with an image of Obama that packs a more ethnic punch.

This deliberate attempt to insult the President is wrong on many levels. First, Perry’s photo may indeed be of him at or around the age of 22, but Obama’s photo is obviously much younger. [Note: I have confirmed that Obama was 18/19 when the pictures were taken by a student photographer, Lisa Jackson in 1980]. Second, while Perry did serve in the Air Force, he avoided combat duty despite the fact that his service began in 1972 and the Vietnam war was still raging until 1975. 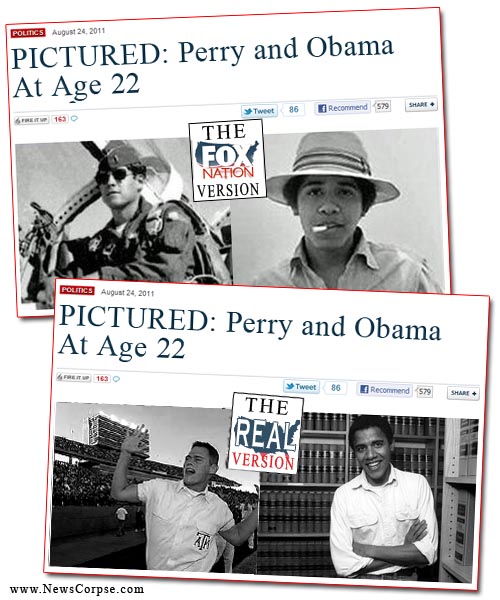 It is painfully clear what Fox is trying to convey to their gullible and bigoted audience. This sort of open prejudice and hate mongering needs to be exposed and disseminated widely so that Fox does not get away with such revolting behavior. And every day that the rest of the media continues to treat Fox as if it were a legitimate news enterprise is another day of shame for the press.

And on the lighter side, the brainiacs at Fox can’t even count: 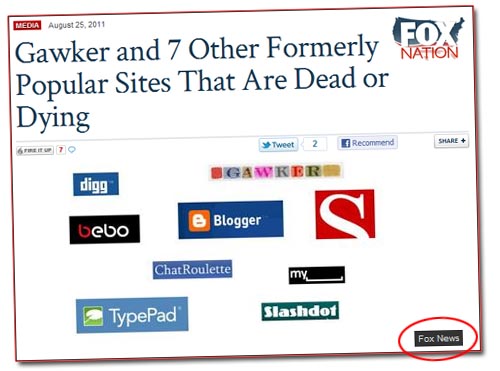 Notice that the article refers to Gawker and 7 other web sites that are dead or dying. However there are eight additional web sites represented by the logos. In fact, there are nine if you include the one in the bottom right corner. So Fox is admitting that they are dead or dying. And why not when they can’t even count to ten.