After more than three years and tens of millions of dollars, special counsel John Durham has finally flamed out, suffering another humiliating loss in court with the acquittal of Igor Danchenko. The investigation was from its outset a contrived political ploy aimed at absolving Donald Trump of his conspicuous guilt for colluding with Russia during the 2016 presidential campaign. 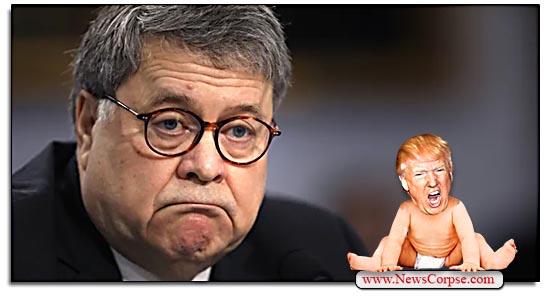 Now that Durham has failed to secure a single conviction in court, Trump and his panderers for Putin are attempting to spin the Durham probe as a Bizarro World success. They claim that Durham never really wanted to convict anyone, and that his real goal was to tarnish the reputation of the FBI and the courts as corrupt, “Deep State,” anti-Trump provocateurs. Trump’s former Attorney Genuflect, Bill Barr went on Fox News to declare victory saying that, although he was “disappointed” …

“The real public interest here was served by exposing the full extent of the corruption that was involved in the ‘Russiagate, and the abuse by the FBI in that whole episode.”

Former Trump AG Bill Barr says he was "disappointed" with the acquittal of Trump dossier source Igor Danchenko, who was charged with lying to the FBI:

"The real public interest here was … exposing the full extent of the corruption that was involved in the 'Russiagate.'" pic.twitter.com/VihWjvP5wd

That’s a peculiar perspective that contrasts entirely with reality. By acquitting Danchenko the jury was explicitly rejecting Durham’s arguments that the FBI engaged in any corruption or abuse. However, Barr was not alone in his delusional assessment. Trump weighed with a posting on his floundering social media scam, Truth Social. He whined that it was…

“A very sad result for our Justice System, but so much has been exposed—far more than anyone thought possible.”

Trump’s post linked to an article on the Fox News website by notorious Trump-fluffing legal hack, Gregg Jarrett, who made the same bogus argument that Barr made. He said that the trial “was never really about Danchenko at all. [and that it was actually] a damning indictment of the FBI’s gross misconduct.” But neither Trump nor Jarrett provided a scintilla of support for their preposterous claims.

Joining these legal deceivers was another former Trump attorney, Joseph DiGenova. He told Newsmax that Durham had “decided he was going to embarrass the FBI,” and that “He wanted to dirty up the FBI.” If that’s true, than Durham should have his license to practice law revoked. That is a wholly unethical exploitation of the court. And Durham, who in his role as an attorney and special counsel is an officer of the court, is oath-bound to comply with legal protocol.

Former Trump attorney Joe diGenova says he thinks that Durham really wanted to lose both trials because his real strategy was to embarrass the FBI with his cross-examinations. pic.twitter.com/oOylnfGbAN

These arguments defending Durham’s failures seem to be uncannily similar. It’s almost as if they were coordinated. And there are more where they come from. Sen. Marsha Blackburn said that “the latest loss by Durham shows that the justice system is biased against MAGA and Hillary was behind the whole thing.” And Margot Cleveland, Senior Legal Correspondent for the Federalist wrote that “Russia Hoaxers, not Durham, Should be Embarrassed.”

But piling on synchronized narratives doesn’t mean that they make any more sense. A more rational assessment was made by constitutional law professor Lawrence Tribe of Harvard, who observed that Durham is just the latest casualty of associating with Trump:

“One more formerly reputable lawyer bites the dust on a mission for Trump, this one doubly doomed by its handling by Barr.”

One more formerly reputable lawyer bites the dust on a mission for Trump, this one doubly doomed by its handling by Barr:https://t.co/uCYNbsjIwC