Nothing is more predictable than Fox News spinning a positive news story as a catastrophic calamity if they can find a way to blame it on President Biden or the Democrats. In fact, Fox News actually favors America failing during Democratic administrations so they can use it as a political cudgel.

On Thursday morning Harris Faulkner, a Fox News host that they pretend is a “straight news” journalist, reported on the announcement that the Gross Domestic Product (GDP) unexpectedly rose more than anticipated for the third quarter of 2022. The 2.6% growth was welcomed by President Biden who said in a statement that…

“For months, doomsayers have been arguing that the US economy is in a recession and Congressional Republicans have been rooting for a downturn. But today we got further evidence that our economic recovery is continuing to power forward.”

Despite the unambiguously good news, Faulkner sought to portray it as evidence of an economic apocalypse. She began by regurgitating conservative media “concerns for the liberal political party that President Joe Biden just spent too much time talking about abortion last week.” It is unlikely that the majority of Americans who favor reproductive choice think too much time was spent on the issue.

Faulkner then segued to her criticism of Democrats for supposedly switching gears and “trying to go all in on the economy.” Of course, she can only assert that by ignoring the fact that Democrats have been viscerally engaged in economic issues for months, but that Republicans have been obstructing them at every turn. The GOP voted almost in lock-step against Democratic initiatives to lower drug prices, reduce child poverty, extend unemployment benefits, raise the minimum wage, prohibit gas price gouging, limit the cost of insulin, go after rich tax cheats, expand baby formula production, make the wealthy pay their fair share, and more.

But Faulkner wasn’t finished. She also complained that inflation and interest rates were “robbing people of any chance to realize the American Dream.” Never mind that her party and network stood in the way of resolving those matters. And she had the audacity to say that Democrats were “finally now trying to convince voters that they care about the economy.” Again, she simply wasn’t paying attention. Or more accurately, she was lying.

But Faulkner still wasn’t finished. She also said that the new GDP numbers were “not much for [Democrats] to work with,” and that they were just a “slight uptick in the third quarter.” That allegedly slight uptick actually wiped out the negative numbers posted in the previous two quarters combined.

But Faulkner still wasn’t finished. She concluded with remarks that didn’t even make sense…

“If Democrats truly believe that Americans would not understand or care about this, then why are they suddenly trying to convince the voters that the economy is all the Republicans fault? They are in dire straits, Democrats are, with voters. And they know it.”

Huh? She prefaces that comment with a bizarre assertion that Democrats “believe that Americans would not understand or care” about the economy. Where she gets that from is a complete mystery. But her inference from that non sequitur somehow leads to Democrats faulting Republicans for the economy. Well, considering the GOP’s deliberate efforts to prevent any solutions, Democrats would be quite right in assigning that blame.

That would be bad enough if it stopped there. But Republicans are openly promising to sabotage the economy in order to improve their electoral prospects in the midterms and in 2024. Thay have said so explicitly. Funny, Faulkner never mentioned any of that.

"With the new GDP numbers out this morning, not much for [the White House] to work with still." pic.twitter.com/NjtmZZSZBv

For nearly two years now, Donald Trump has been peddling his dangerous and preposterous allegations that the 2020 presidential election was “rigged” and “stolen” from him. Now, just in time for Halloween, Trump is proposing a new and frightening horror story for how President Biden and the Democrats stole the election. 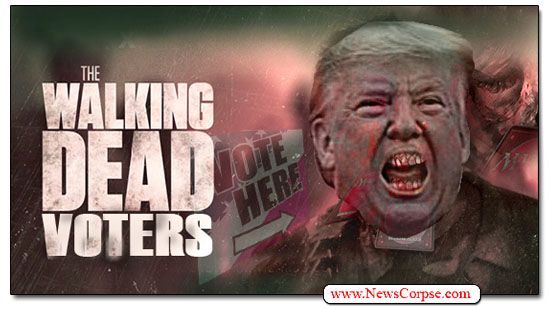 Throughout the past two years Trump has been utterly incapable of providing a shred of evidence to support his claims of voter fraud. Even though he and his minions have pushed their conspiracy theories in over 60 court cases that they lost. They have produced and promoted (with the help of Fox News) pathetic and easily debunked crocumentaries that failed to expose any fraud whatsoever. They have promised to present their proof dozens of times, with each promise going unfulfilled. They seem to have an obsessive need to humiliate themselves with their persistent, but fruitless, crusade.

“And then, of course they voted 6, 7, 8 times, as much as they could in the local areas. Some of the people went back, I guess, they said 28 times in one day to vote at different places with numerous votes. but they can’t put in 1,000 because it wouldn’t look right. They’re very smart. They go in with 5 votes, 6 votes, 7 votes, and then they go to another one. But it adds up to millions of votes.”

In a new interview, Trump says he heard that some people went back and voted up to 28 times on the same day in 2020. pic.twitter.com/5Z5ZxjEm5C

Of course it does. Trump has obviously given this a great deal of thought and is convinced of the accuracy of his claim. So let’s break it down.

Biden won in 2020 with seven million votes more than Trump. For him to have amassed that many more votes by deploying an army of voting criminals submitting as many as eight phony ballots each, the Biden conspiracy would have had to recruit 875,000 people willing to risk going to prison in order to rig the election.

Where would those people come from? How would they have been recruited and trained? And how would all of that been done without a single person spilling the beans, or a single slip up exposing the whole scheme?

Even if we use Trump’s highest number of ballot cheats (28), it would have taken 250,000 of them to hit the seven million mark. It would have been the biggest mobilization of criminals in history. If Biden could have planned and pulled this off, he deserves to have won. And remember, this is someone that the Trump camp says is senile and totally incompetent.

What’s more, all of these millions of votes would have had to have been cast in someone’s name. They couldn’t just be duplicates because those would not have counted. So apparently Trump believes that there were seven million phantom voters with valid registrations whose ballots could be hijacked. Perhaps they’re all zombies.

With the 2022 midterm election now less than two weeks away, Biden should reassemble his voter fraud army and deploy them to win supermajorities in the House and Senate, as well as in state houses and other local offices. There wouldn’t be a darn thing that Trump and his Republican losers could do about it.

But don’t be too scared. If Democrats prevail in the midterms, Trump will surely claim that that’s exactly what happened. And still with no evidence whatsoever. Since the GOP has abandoned any attempt to shape a party platform (other than gutting Social Security and Medicare, giving the government control over reproductive choice, and cutting taxes for corporations and the wealthy), they have plenty of time to contrive these crackpot conspiracies. What’s really scary is that with all that extra time, you’d think they would be better at it.