If anyone still isn’t convinced that the MAGA movement led by Donald Trump is a cult, Trump himself has just provided more proof of the theological underpinnings of his pseudo-church. He continues to demonstrate that fealty to the MAGA messiah is more important than any political goal that conventional political parties pursue.

Commenting on his floundering social media scam, Truth Social, Trump lashed out at the Republican candidate for U.S. in Colorado, Joe O’Dea. With the upcoming midterm elections running extremely close, and control of Congress at stake, most campaign strategists would seek to improve their odds of winning every race. But for Trump that is not as important as securing unflinching support and adoration for himself. He wrote that…

“There’s this RINO character in the Great State of Colorado, Joe O’Dea, that is running against the incumbent Democrat for the United States Senate, who is having a good old time saying that he wants to ‘distance’ himself from President Trump, and other slightly nasty things. He should look at the Economy, Inflation, Energy Independence, defeating ISIS, the Strongest EVER Border, Great Trade Deals, & much more, before he speaks. MAGA doesn’t Vote for stupid people with big mouths. Good luck Joe!”

Notice that Trump regards “distancing” from him as “nasty.” And his definition of RINO is, as usual, anyone who doesn’t bow down low enough to satisfy Dear Leader. O’Dea’s offence was to state that he didn’t want to see Trump run again in 2024. And that was all that Trump needed to hear to scuttle his campaign and, potentially, lose the opportunity to win a Republican majority in the Senate.

Trump is too egomaniacal to grasp the nuances of politics. So he demands unfaltering loyalty above all else. Even when that would damage a candidate’s prospects in a state that leans toward Democrats. The Democratic incumbent, Michael Bennett, currently has an eight point lead in the polls. For contrast, President Biden is smart enough to know that he should only campaign on behalf of Democrats in states where his help would be beneficial and welcome.

How Trump thinks it would be be helpful to insult the Republican candidate is a mystery. Other than to simply recognize that Trump himself is too stupid to understand how the game is played. He says that “MAGA doesn’t Vote for stupid people with big mouths.” But if that were true than they surely wouldn’t vote for Trump or any of the mini-Trump’s he’s endorsed.

Democrats, on the other hand, will appreciate Trump bashing his own party’s candidate, which should give a boost to Sen. Bennett, and to the Democrats’ chances of retaining a majority in the Senate. In fact, much of Trump’s asinine behavior is measurably more beneficial to Democrats than it is to Republicans. And he will surely expect us to thank him for it later.

The terrain of social media is getting more bizarre with the latest announcement of another takeover by another wealthy narcissist. This time it’s the artifice formerly known as Kanye West who is proposing to buy Parler, an alt-Twitter enterprise that is the home of notorious white nationalists and anti-Semites. 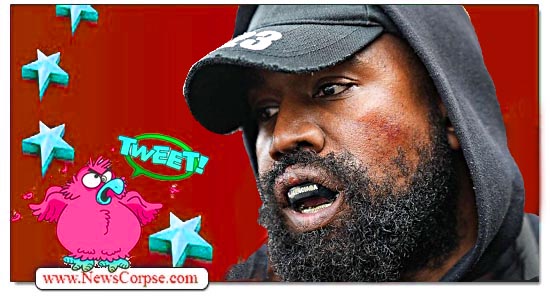 West, or “Ye” as he is pretentiously calling himself this week, has made an offer to purchase Parler after he was deservedly exiled from Instagram and other platforms due to his rancid hate speech. It’s a perfectly predictable course of action for a rich, anti-Semitic, egomaniac who can’t bear to be out of the public eye for twenty minutes.

RELATED: Trump Threatened to ‘Blow Up the Company’ if Truth Social Execs Didn’t Give Their Shares to Melania

Parler is a social media website that has gained notoriety for harboring unabashed white nationalists such as Nick Fuentes and Laura Loomer. It is frequented by those who plotted the January 6th insurrection, including members of the Proud Boys and followers of QAnon. Parler is currently backed by the ultra-conservative Mercer family. According to The Hill…

“Kanye West plans to acquire Parler, a social media app popular among conservatives, the network’s parent company announced Monday. The move by the rapper, legally known as Ye, to grab up the app comes after he was banned from Twitter and Instagram for antisemitic posts on those platforms.”

“’In a world where conservative opinions are considered to be controversial we have to make sure we have the right to freely express ourselves,’ Ye said in a statement announcing the agreement.”

The comment that got West bounced from Twitter and Instagram threatened to go “Death con 3 On JEWISH PEOPLE.” Now he is reacting to his banishment by scooping up a platform that welcomes such blatant bigotry, That’s consistent with the view of right-wingers who only mention free speech when what they actually mean is the ability to speak freely about their prejudices and to incite violence against those they hate.

While many conservatives have been cheering West’s attempt to acquire Parler, it’s not a universal sentiment, In fact one of his most ardent admirers, Donald Trump, isn’t on board. Trump has reportedly told multiple people that West is acting too “crazy” and that he needs some professional “help.” That assessment came shortly after West appeared on Fox News for a deceptively edited interview (posted below) with fellow bigot, Tucker Carlson.

Trump has his own problems with recent anti-Semitic remarks. He posted on his Truth Social a warning to American Jews that they need to “get their act together” before “it is too late!.”

Yet somehow, conservatives and Republicans continually whine about the left dominating the media. They must get that from their Dear Leader Trump who has bragged that he is “the most fabulous whiner.”

SEE: Victim-in-Chief: Trump is the most Cowardly, Whining, Crybaby to Ever Be President

Tucker Carlson had a lot of praise for Kanye West's ideas. Why didn't these clips make the cut? https://t.co/fd50o5l5sB pic.twitter.com/SqNGKsEnWK