It takes real chutzpah for Alex Jones to continue to present himself to the public after having been ordered to pay nearly $50 million to some of the families of the children murdered in the Sandy Hook Elementary School massacre that he said never happened. He accused the families – even the children – of lying and faking the whole thing. Another trial is currently in progress on behalf of more victims’ families. 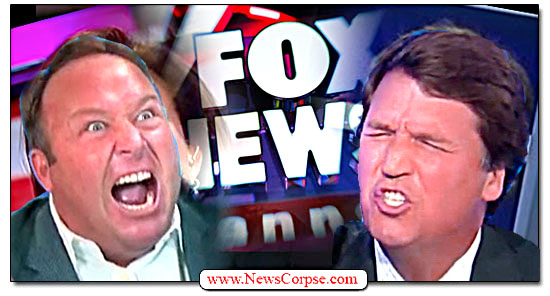 Undaunted by anything resembling decency, Jones went on Steve Bannon’s podcast to resume spinning his fear and hate mongering conspiracy theories. During this episode Jones aligned himself with Donald Trump’s twisted Republican Party and his Ministry of Disinformation, Fox News. Their embrace of the barbaric dictator, Vladimir Putin, is one of the most reprehensible political confederations since the Nazi-supporting “America First” contingent in the 1930s.

RELATED: Trump’s ‘Solution’ to the War in Ukraine is to Appease Russia and Quash Any Criticism of Putin

Jones was appalled that Democrats have a negative opinion of such a virtuous sweetheart like Putin. He couldn’t seem to grasp why anyone would dislike the man who is currently slaughtering hundreds of innocent Ukrainian civilians in an egomaniacal attempt to illegally annex portions of that country. Jones ranted…

“Do you leftists really want to destroy the world in a nuclear fire because you have a fetish for hating Russians and Putin because they’ve become a little bit more Christian? Again, they don’t hate Russia because they’re the former Soviet Union. The Left hates Russia because they’re becoming more like the American Midwest. They’re becoming more conservative. They’re against transgenderism and teaching five year olds about sex and all the rest of this. So that’s why Hollywood and the Rob Reiners of the world literally have a fetish for destroying Russia.”

Alex Jones tells Bannon liberals “have a fetish for hating Russians & Putin because they’ve become more christian .. The Left hates Russia because they’re becoming more like the American Midwest. That’s why Hollywood and Rob Reiner literally has a fetish for destroying Russia.” pic.twitter.com/GhynOox52m

There’s a lot of putrid crackpottery to unpack there. Let’s begin with Jones’ preposterous assertion that it’s leftists who are threatening nuclear war. That was Putin’s idea. Apparently Jones thinks that Democrats are at fault because they aren’t cowering under Putin’s threat, as Jones would prefer America to do.

Jones then lauds the piety of Putin. He regards Trump’s pal Vladimir as a saintly figure who exemplifies the American ideal of Christianity. Never mind that he just happens to be engaging in heinous war crimes by murdering men, women, and children, because Ukraine won’t surrender their sovereignty to his tyrannical imperialism.

Like Trump and Fox News, Jones Favors Putin over American patriots who believe in freedom and democracy. The right’s perverse interpretation of Christianity veers off more toward totalitarianism and religious oppression and cult worship.

Yet that’s the dominant viewpoint of faith among the right-wing in America today. They have utterly abandoned the principles of both Christianity and the Constitution. And they aren’t the least bit shy about expressing these depraved ideas, or foisting their deranged doctrine on everyone else.