The United States is about two weeks away from one of the most consequential elections in decades. Many of the races are tightening up as Democrats and Republicans make their closing arguments for support. And casting its dark shadow over the whole political season is Donald Trump and his extremist MAGA movement aimed at extinguishing America’s experiment in government of, by, and for the people. 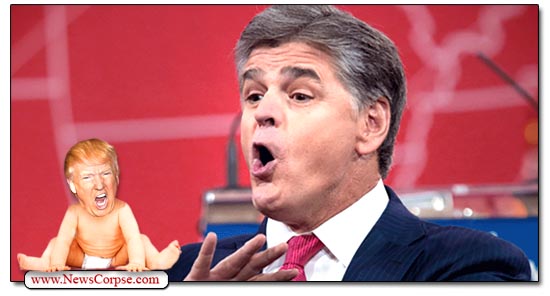 The majority control of both houses of Congress is at stake, with Republicans literally promising to sabotage the U.S. and world economies if Democrats don’t succumb to GOP demands. Those demands include gutting Social Security and Medicare, criminalizing abortion, befouling the environment, giving more tax cuts to corporations and the wealthy, and installing anti-democratic election deniers in positions where they can dispense with democracy entirely.

Fox News is playing its customary role in the crippling of self-government. While Democrats have to raise campaign funds in order to pay for political advertising, Republicans are benefitting from the largesse of Rupert and Lachlan Murdoch’s ultra-rightist Ministry of Propaganda, aka Fox News.

The network as a whole is promoting Republicans candidates for local and state offices throughout the country. But no one is doing it with the unabashed political biases of Sean Hannity. His program has already hosted hour-long GOP campaign broadcasts with Mehmet Oz and Herschel Walker. He has scheduled another with Kari Lake and Blake Masters. And now he is teasing one with Marco Rubio…

Rubio: If you saw that debate, you realize pretty quickly that the media, even the local media, is not going to be helping me with my message. I’m going to have to pay for it.
Hannity: Well, we’ll give a little hint. I will be seeing you in person next week. That’s all I can say. Not allowed to say any more than that.

Rubio: If you saw that debate, you realize pretty quickly that the local media is not going to be helping me with my message. I’m going to have to pay for it pic.twitter.com/7fn5UtL3yK

First of all, what gave Rubio the impression that the media was supposed to be “helping me with my message”? And how can he say with a straight face that he is being forced to pay for disseminating his message, while he is excreting it for free to Hannity’s glassy-eyed audience?

[UPDATE 10/28/2022: Hannity made good on his promise to see Rubio in person by hosting another hour long free campaign ad featuring both Rubio and Ron DeSantis]

Hannity knows that his political favoritism is unethical and utterly inappropriate for any journalist. Fortunately for Hannity, he publicly declared a few years ago (in a deleted tweet that is preserved here) that “I’m not a journalist jackass.” Which raises the question that if he isn’t a “journalist jackass,” then what kind of jackass is he?

The constant stream of Republican propaganda that emanates from Fox News isn’t conventional news reporting. It is actually in-kind contributions by Fox News to the GOP that amounts to millions of dollars of free advertising. The Washington Post has calculated the value of that gift to the GOP…

“This is extremely valuable airtime. Thirty-second spots on Hannity’s show ran more than $76,000 at the higher “issue rate” in the third quarter, according to the Columbus, Ohio-based firm Medium Buying. Candidate rates are lower, often substantially, particularly when you buy more time. If we assume that each 30 seconds costs as little as $50,000 — well beneath what Medium Buying has been cited for candidate spots in the past — the airtime provided by Hannity would have run the candidates north of $2.4 million.”

Other beneficiaries of Hannity’s donations include Sen. Ron Johnson, running for reelection, Senate candidates J.D. Vance and Rep. Ted Budd, and gubernatorial candidate, Tudor Dixon, to name just a few. The Post reports that “In total, Hannity’s spent more than 97 minutes of his last 10 hours of airtime interviewing 18 [GOP] candidates.” And these segments are better than brief campaign ads because they are longer, they are loaded with positive commentary by both the candidate and the host, they insert negative remarks about the Democratic opponents, and there is no opportunity for any rebuttal, even if it was paid for.

For these reasons, Fox News should be regarded as a political action committee and be forced to comply with the laws regulating them. And the candidates should be required to report the value of the donations and to provide disclaimers that reveal that they approved of the ads and who the principle donors are.

But don’t hold your breath waiting for either Fox or these Republicans to behave ethically. They never have before, so why would they start now? Especially when they have Donald Trump praising them for their blatant dishonesty and recommending them for prestigious awards that they never earned?

RELATED: Trump Threatens to Sue Pulitzers Over ‘Russia Hoax’ and for Not Giving Awards to Sean Hannity