Last year the world was gripped by fear over the deadly outbreak of Ebola in West Africa. There is no doubt that it was devastating for the victims and their families. However, for most of the rest of the world, and particularly the United States, it was a remote concern that required only some common sense preventative measures and compassionate commitment to those affected.

Today the World Health Organization declared the Ebola crisis in Liberia over. That determination was arrived at by the absence of any new infections for 42 days, twice the incubation time for the virus. The neighboring nations of Guinea and Sierra Leone are not officially out of danger, but both have recorded only nine new infections, the lowest number since the outbreak began.

This news cannot help but recall the lengths to which Fox News, and other media, went to foment fear of the virus and the foreigners who were carrying it. But even more repulsive was the determination of Fox to turn the crisis into something political. For instance… 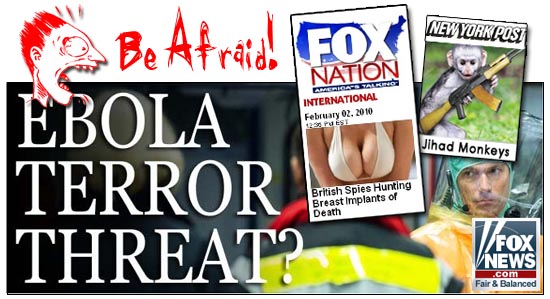 The purpose-driven campaign by Fox to drench the nation in panic occurred, not coincidentally, in the weeks just prior to the 2014 election. Miraculously, the subject that was the source of so much manufactured terror virtually disappeared immediately after election day. The notion that the hysteria whipped up by Fox was political at its core simply cannot be avoided. A few weeks later, PolitiFact named “Exaggerations about Ebola” their “Lie of the Year” for 2014. [An interesting side note: PolitiFact’s readers’ poll for Lie of the Year was another Fox News fabrication that “Global warming is a hoax.”]

While there was plenty of crazy to go around, perhaps the most surreal accumulation of outright dementia seeped out of the mind of Fox News “Psycho” Analyst, Keith Ablow (whose name is an anagram for “K With Ebola”). Ablow pushed the usual Fox News fallacies that Ebola was a threat to the every American and was being spread by aliens and even pets. But he went even further to say that…

“I believe the president may literally believe we should suffer along with less fortunate nations.”

That is what passes for a medical diagnosis from this alleged doctor who has previously accused Obama himself of being a virus. It is also what passes for journalism from a network that exists to misinform its audience and exploit phony crises to drive them trembling into bunkers stocked with guns, gold, bibles, and freeze-dried pork. If Fox News were really interested in addressing an epidemic that is killing tens of thousands of Americans every year, they would report on the scourge of guns and the NRA, which kills more Americans in a single day than Ebola has killed ever.

For the record, here is a collection of headlines from Fox News during the alleged Ebola crisis in America:

Be afraid, America. Be very afraid.

13 thoughts on “Sorry Fox News, Ebola Wasn’t The Obama Apocalypse You Hoped It Would Be”