The Republican Party in the era of Donald Trump has become a grotesque and dangerous political aberration. In its current rancid state it would be unrecognizable to members who recall even the relatively recent past when still hardcore conservatives like Bush and Reagan were its leaders. 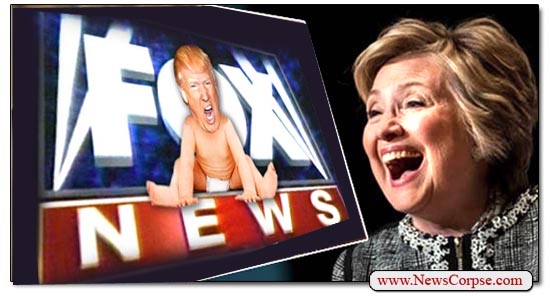 The Trumpists have transformed the GOP into a cult of personality wherein total obeisance to Dear Leader is mandated, and any deviation from total devotion is viewed as unforgivable disloyalty and sacrilege.

The manifestation of this amoral ministry is evident in the Party’s adoption of Russian dictator Vladimir Putin as a hallowed figure who is sanctified by Trump and favored by the Republican base over the popularly elected President Biden. Even the brutal invasion of Ukraine couldn’t pry a critical word about Putin from Trump. And Trump’s Propaganda Politburo (aka Fox News) was singing from the same hymnal. Especially Putin lover Tucker Carlson.

This decaying of a once mainstream party has not gone unnoticed. And the latest observer to raise a red flag is former Secretary of State, Hillary Clinton. In an op-ed in The Atlantic, Clinton wrote about “A State of Emergency for Democracy.” The article made the point that “Trump has always had a personal attachment to Putin.” But Clinton went further to highlight how the rot has traveled down from the fish’s head (Trump) to its body (the GOP). What follows are a few choice excerpts:

“Russian president Vladimir Putin pines for the old Russian empire and takes Ukraine’s independence as a personal affront. But the invasion of Ukraine is not a limited regional dispute between neighbors. […] Ukraine is one flash point in a larger global struggle between democracy and autocracy — one that stretches from the steppes of Eastern Europe to the waters of the Indo-Pacific to the halls of the U.S. Capitol.”

“It was dismaying but not surprising that Trump praised Putin’s move to recognize and occupy separatist enclaves in Ukraine as ‘genius’ and ‘savvy.’ That’s what we have come to expect from Trump. But even Republican leaders who still take a Reaganesque view of America’s role in the world and talk a good game about deterring Russia and competing with China are undercutting those goals by aiding and abetting Trump’s attacks on America’s democratic institutions.”

“Those Republican leaders promising tough sanctions on Putin’s economy and inner circle seem helpless to tamp down the pro-Russian sentiment in their party ignited by Trump, fanned on a daily basis by Tucker Carlson on Fox News.”

Clinton was remarkably prescient about the dangers of a Trump presidency and his unsavory association with Russia and Putin. In August of 2016 she posted an article on her website that asked “5 questions every voter should ask about Donald Trump’s bizarre relationship with Russia.” Voters still need to ask those questions. However, it isn’t just voters who should be questioning Trump and his Republican confederates. The media, the Democrats, and even conscientious Republicans (the few that might be left) should be concerned about the direction the GOP has taken.

Clinton’s op-ed is a comprehensive analysis of the disintegration of the Republican Party. It’s no wonder that Trump and his cult followers are so adamant about destroying her. They recently embarked on a campaign falsely accusing her of spying on Trump. And Trump himself has suggested that Clinton should be executed for the imaginary crimes he’s accusing her of. That’s the demented leader of today’s Republican Party. And the rest of his glassy-eyed flock is faithfully following his lead.